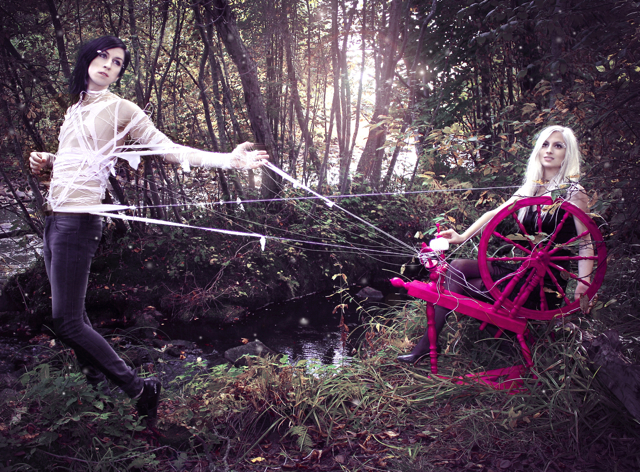 The Deer Tracks are a Northern Light Electronica duo from Sweden, and if they aren’t recording in one woodland cabin or another, they’re off-duty in their tiny hometown of Gävle, best known for burning an effigy of a goat every Christmas.

David Lehnberg & Elin Lindfors are the only two constant pieces in the always evolving puzzle of The Deer Tracks. These two versatile multi-instrumentalists and singers, handle everything from writing to recording to production and even data recovery, depending on how badly behaved their way too-old computers are being. But they aren’t worried about the bumps and detours along the way. Says David: “The universe has its own way of course connecting.”

After touring Europe and Japan, in the spring and summer of 2010 The Deer Tracks retreated to the Swedish wilderness to create their definitive statement to date. In Elin’s grandmother’s remote cabin with no phone lines, no friends and one barely working computer, The Deer Tracks wrote and recorded their epic The Archer Trilogy, now releasing as their U.S. debut in three parts: Pt. 1, a five-song EP released last March; Pt. 2: a full album to be released on July 5. And Pt. 3 – yet to be revealed as the final installment.

“We try to be close to nature,” says David. “If you’re locked up in a studio where everything is perfect and there’s no wind or rain blowing in to destroy the recording—if you don’t push the boundaries —it’s gonna sound like you’re not trying to do something that’s real. But if you lock yourself up in a cabin in the woods, things start to happen. You’ll start to find your way back to your inner core, back to life.”

For breaks, Elin would splash through a nearby stream and return soaking-wet to record. When their hard drive repeatedly crashed, David would fish through whatever digital fragments were left and stitch together brand-new songs. Cacophony and melody are their two favorite things, they say. On The Archer Trilogy, the otherworldly experimentation collides with the propulsive danceability—but then fractured and kaleidoscoped thanks to The Deer Tracks’ own unique inspirations and way of thinking about music.

We play with everything we can get our hands on!” says David. “Small music boxes, glockenspiels, forks, coffee mugs, pretty much whatever is laying around—we try to build our own instruments in a way. Take “small parts from one to put with another and make special sound. It’s like a big puzzle.”

The Deer Tracks display their signature schizophrenia on The Archer Trilogy: PT.2; Elin sings breathlessly over an anxious synthesizer melody and suddenly a hard-edged guitar riff snaps the song in two, only to fall away as strings and bass sweeps in for a soaring chorus.

Their songs often stride fearlessly into the forest primeval armed with a stuttering beat and a rattling arsenal of percussion and somehow they blend them all together with other natural found sounds and deliberately lo-fi digital artifacts that adds bristles and grit to their relentless melodies.

They don’t like to reveal too much about their lyrics, they say—They can find inspiration from books, movies, mathematicians, real life and things yet to be discovered E “Even though I can write about others’ history, in every history I can find the history of myself,” says Elin. “Every character and every situation—it’s easy to make it your own.”